Kayaking with the Kids

I gave Dave 2 kayaks for our anniversary last November.  Probably not the best month to do this activity since the water’s so cold – so we didn’t.  Nor did we use them in December, January, February or March….

Dave had a 10 day trip to Arizona in April and when he’s away, I try to find something fun for the kids to do.  First thing I thought of – KAYAKS!  First I asked Dave if he would mind if we used his present before he got a chance to use it – it’s a big family, this isn’t such an unusual request.

I asked a friend of mine, who also kayaks, if she would like to come and help me teach the kids how to kayak.  She said sure and I planned the day.

She met us at the local park.  That meant Michael and I had to load the kayaks in the back of the truck by ourselves, with straps and bungee cords.  Let’s just say, we made it to the park with both kayaks 🙂

First things first.  Before we sent the kids out in the kayaks, they had to have a few land lessons.

Paddling is fairly important so we started with that technique… 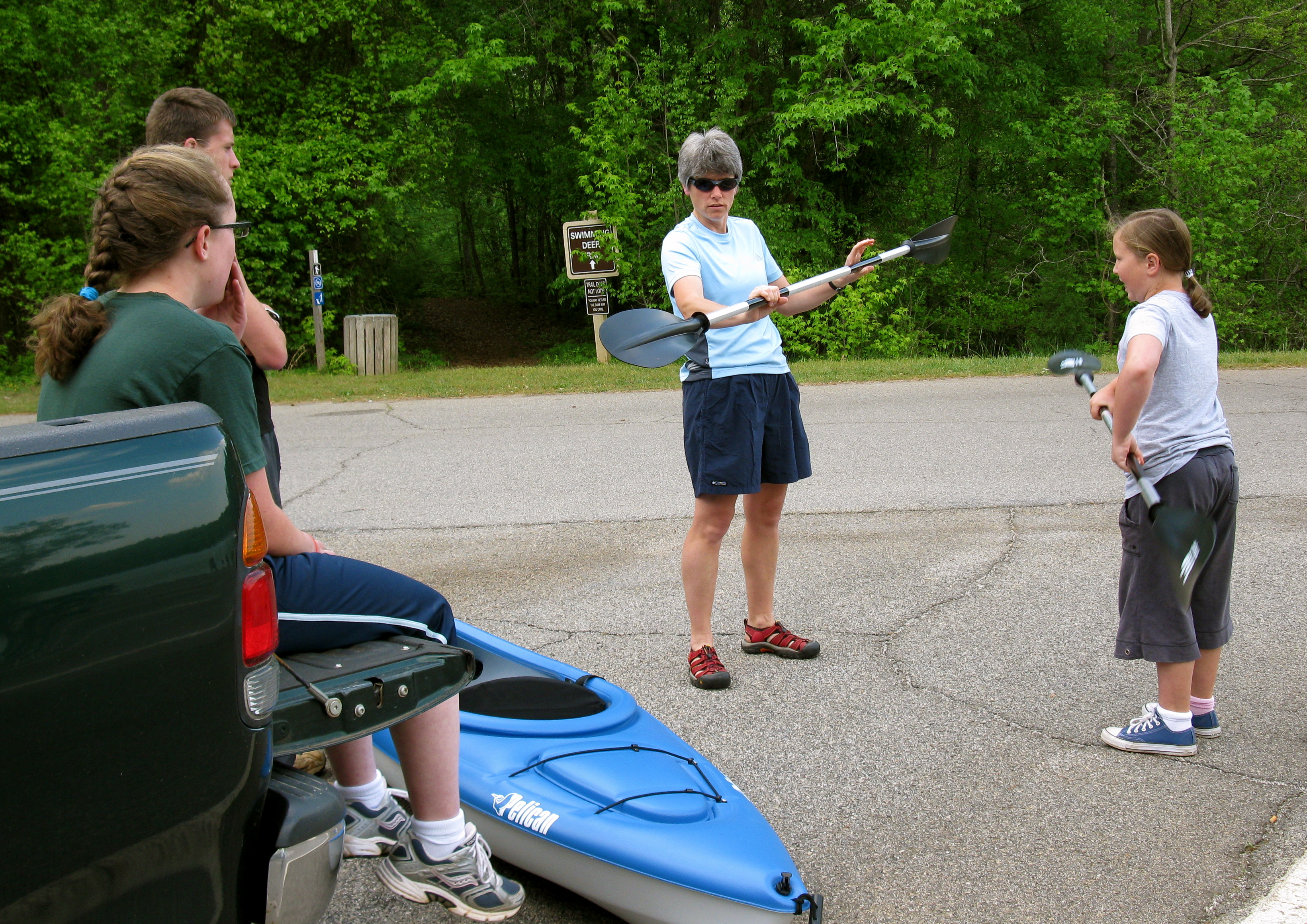 Mae Mae was a fast learner…

Okay – enough instruction.  Into the water with you!

Of course the boy took to the water like a duck.  He was off in the middle of the water before we could get a life jacket on the next person.

“No son, we’re not going to learn how to roll the kayak today!” 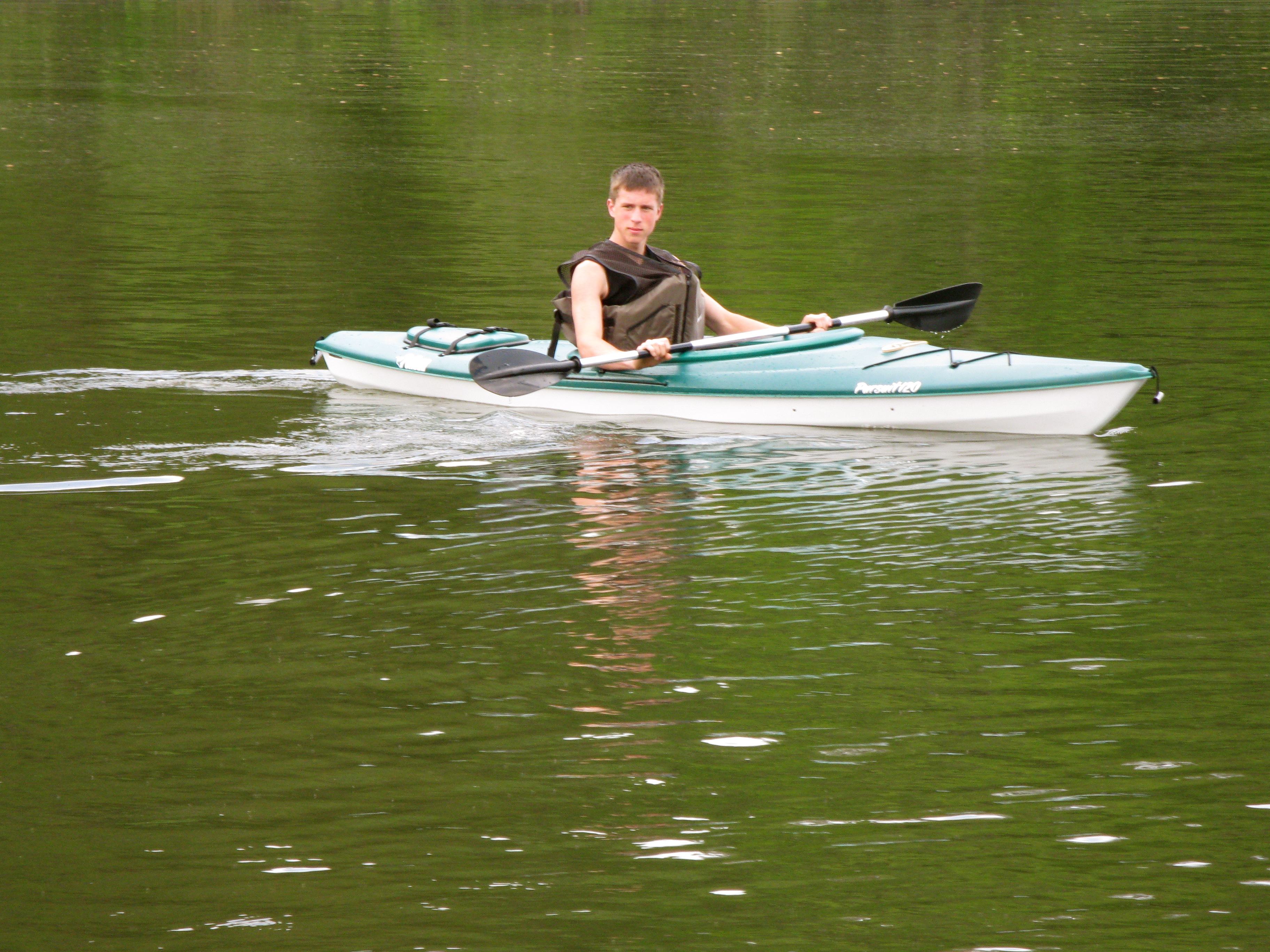 We invented “Kindergarten Kayaking” for Squish.  I tethered the boat so she couldn’t get too far away from me. 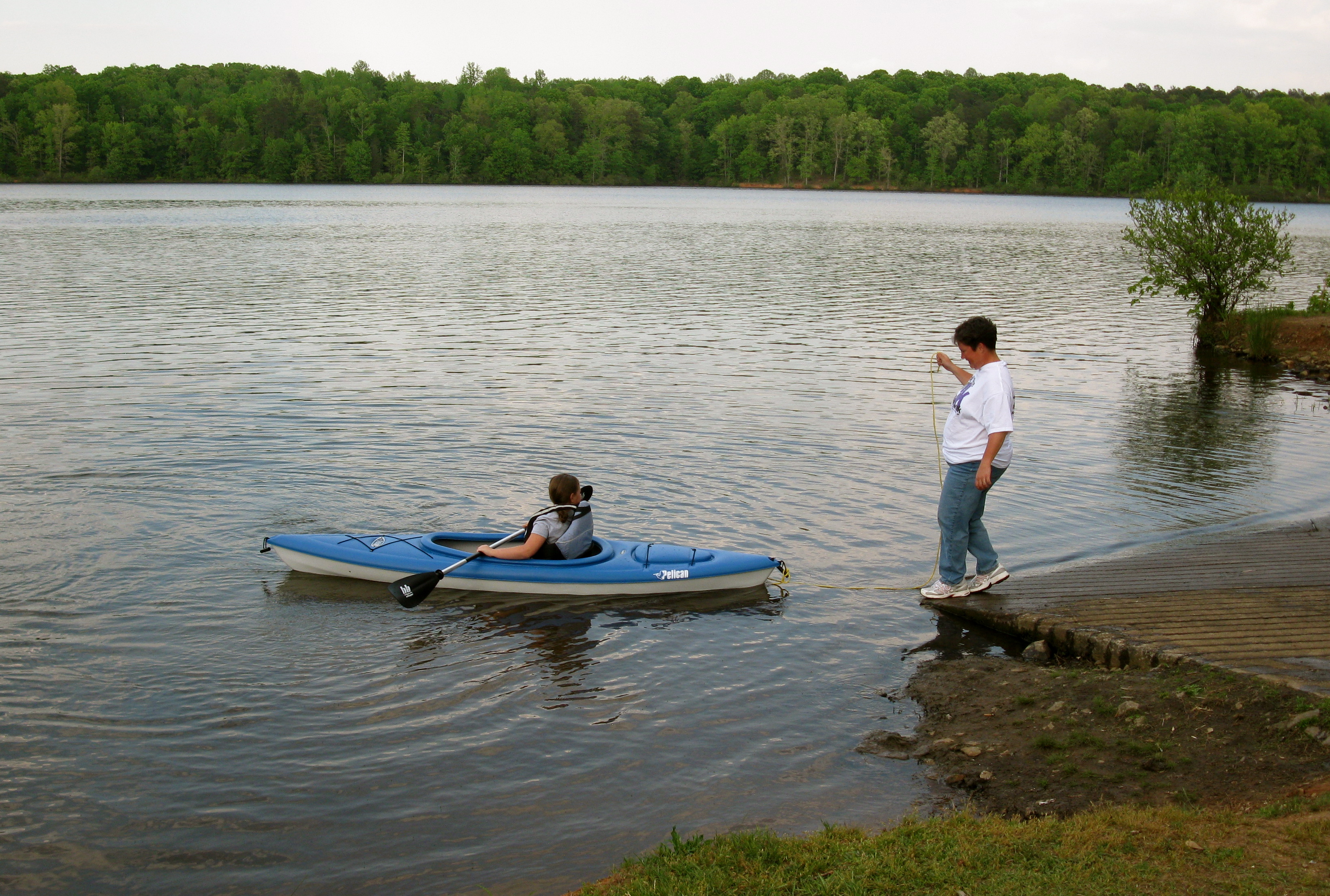 Then we put her on a longer line, letting her go a little further. 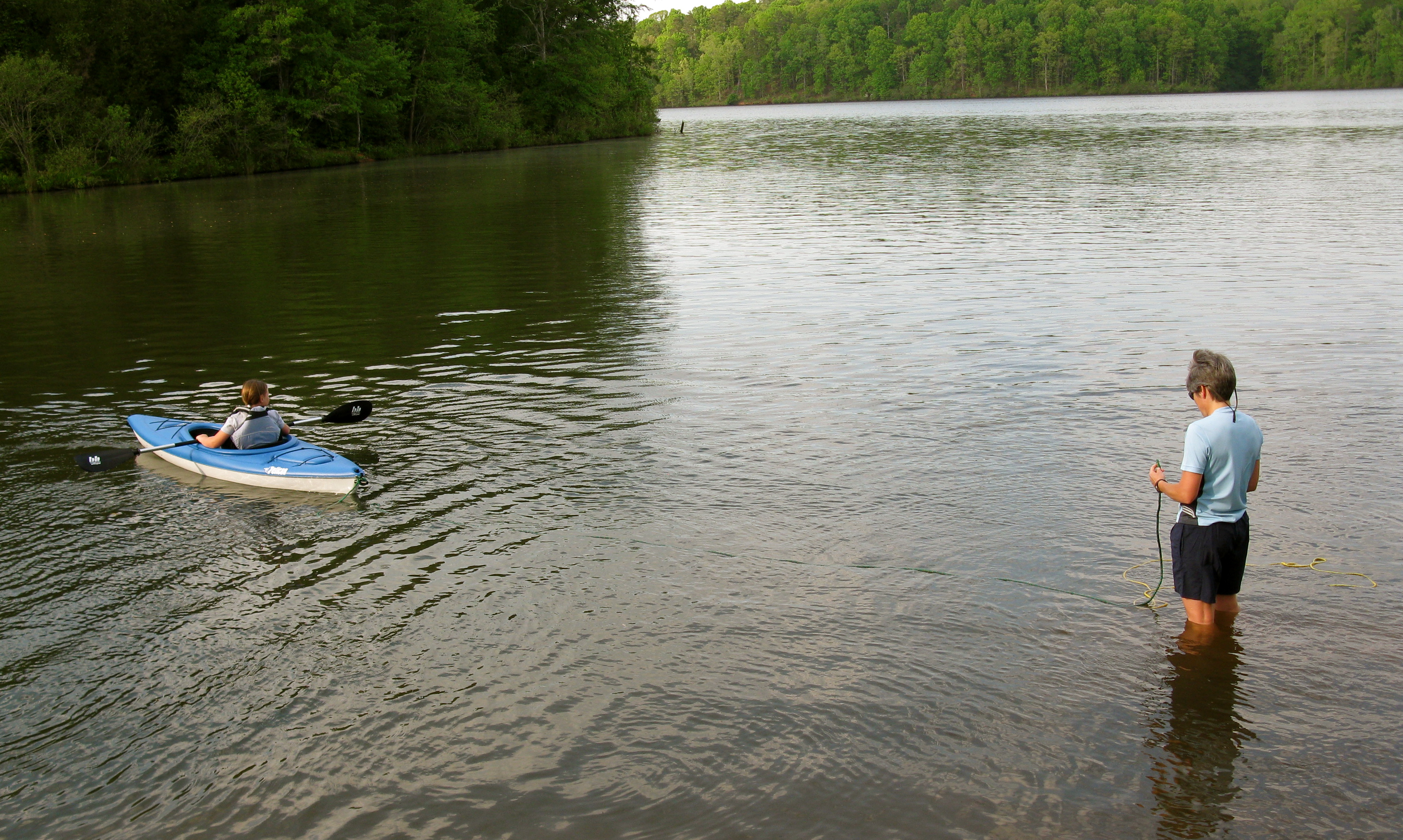 Then my friend got in another kayak with the line, and they went out into the middle of the water.  When Squish could paddle a complete circle around her boat, it was time to let her go….

She did us proud!!  Squish was paddling like a pro and for the most part, she went in a fairly straight line 🙂

Megan received on the water training…

And before long, she and I were out in the middle of the lake!

This gentleman and his dog came down to the water’s edge where we were.  Apparently, the two of them go kayaking almost every evening.  The dog loves it and has her own cushion to sit on in the kayak.  It was so cute! 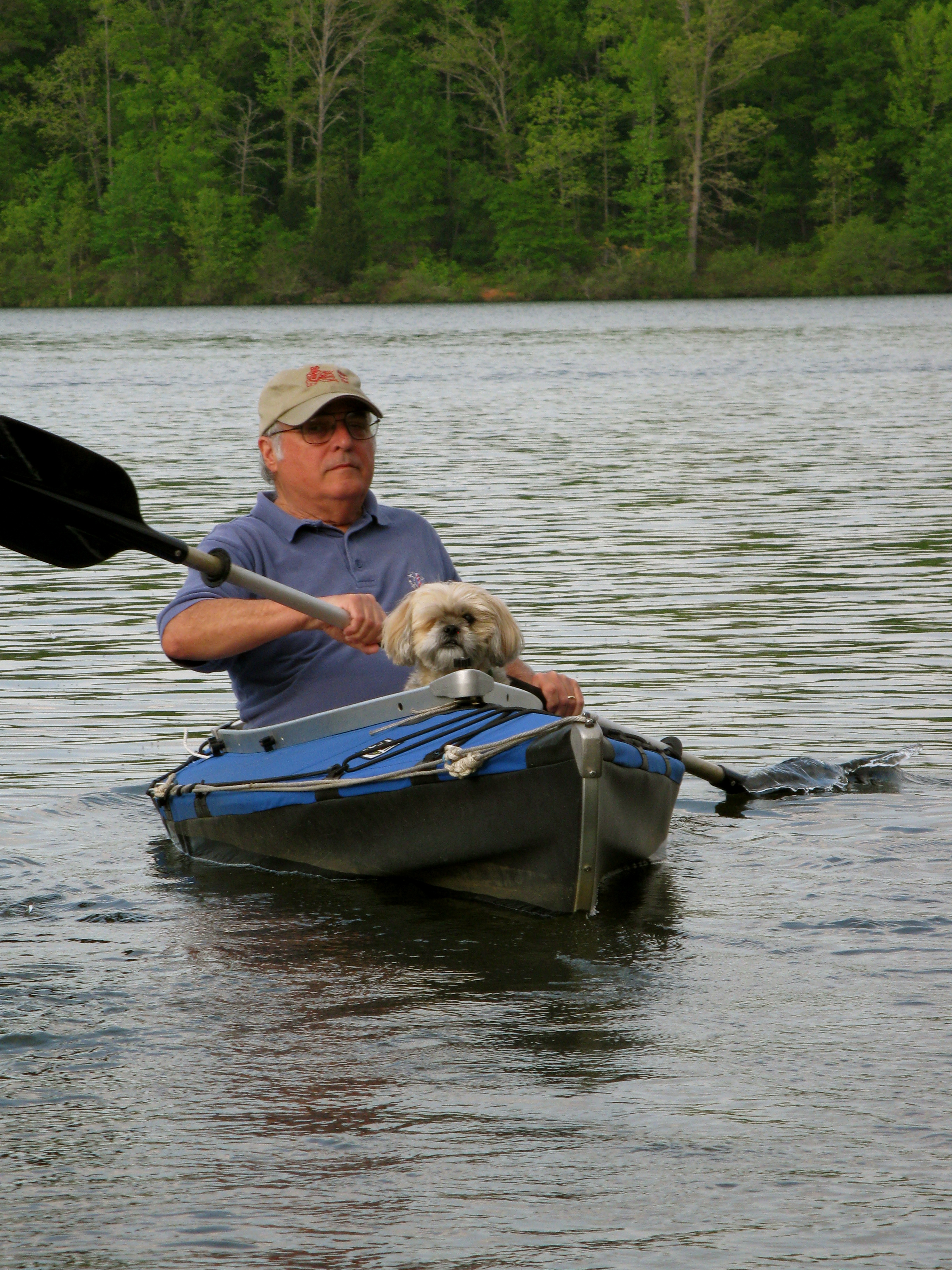 We all had a great time and the kids did really well learning the basic skills for kayaking.  The exuberance over this new sport has made me think I just might need another kayak!  There’s something about being that close to the water, the quiet and serenity.  And of course, the added benefit of an upper body work out.  I highly recommend at least trying this sport, you just never know what “kayaking kid” lies within.

Before we knew it, it was time to load up and head out…if my kids have it their way, we’ll be back next week! 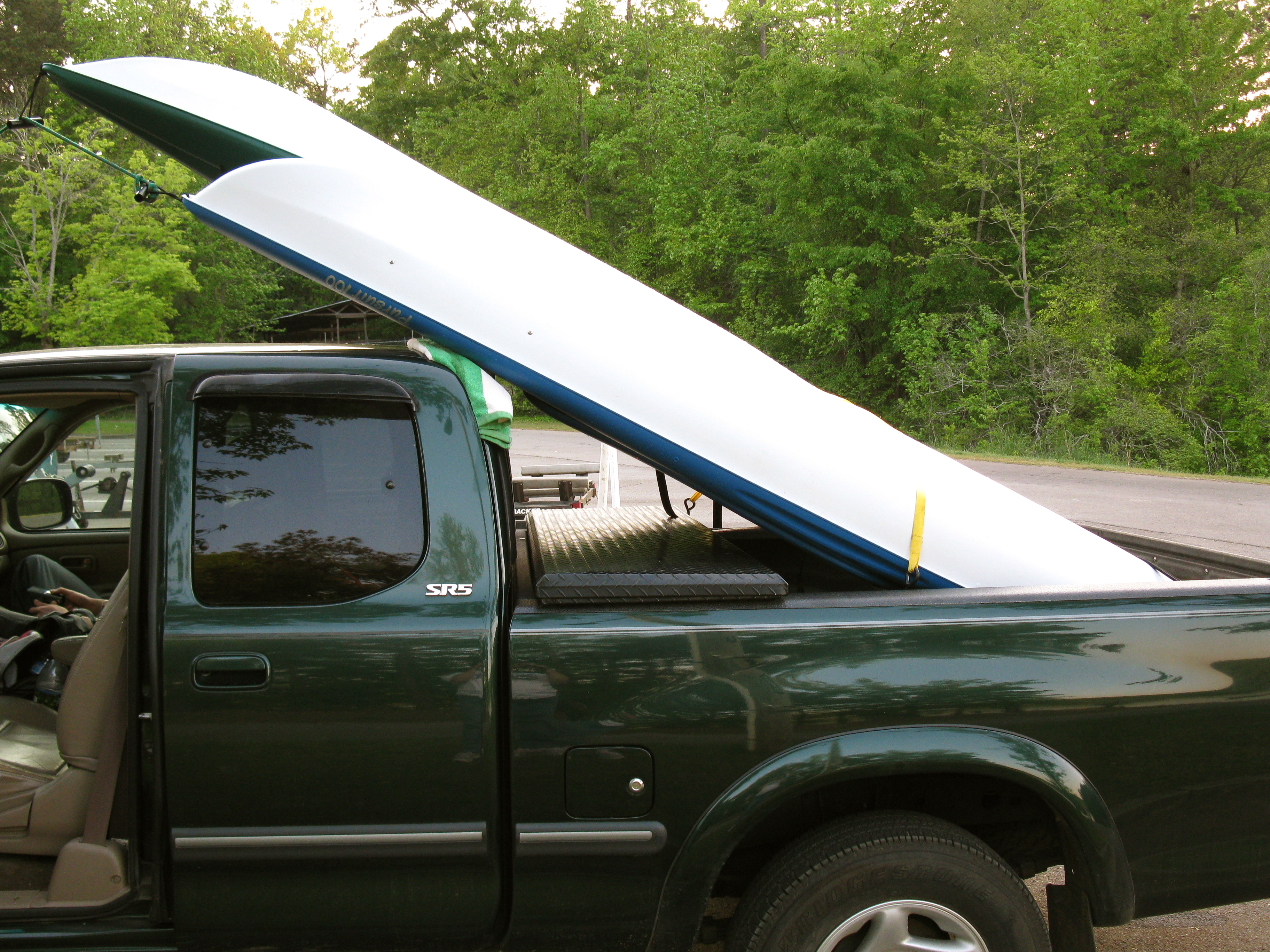