One of my favorite classes during my Master Gardener classes, was the lecture on bugs.  It was absolutely fascinating and I would love to take more classes because I know we just barely skimmed the surface.

I realized that the insect population in the garden has a direct correlation to the success of my garden.  If the “bad” bugs are overtaking my garden, I’m not going to see much in the way of produce. BUT, if the “good” bugs or beneficial bugs are ruling the garden, then I will see a lot of fruit for my efforts.

In actuality, there are more beneficial bugs than bad bugs.  We just recognize the bad bugs more often because of the damage they cause.

I’ve decided to focus on the beneficials for this summer, trying to learn which ones to “keep” and which ones I should try to get rid of.  Granted, if I have a good amount of the beneficials, then they will take care of the bad bugs.

I’ve seen this critter a lot the last few days while I’m in the garden.  It’s the nymph (baby) of a Wheel Bug – which is part of the Assassin Bug group.  Okay, that word alone, assassin, should be helpful in knowing this is one you want to keep around.  I took these shots of this nymph – it was on my broccoli plant.  They’re not plant specific – they will go where there is food.  Obviously, something was eating my broccoli leaves and that’s all this Wheel Bug nymph needed to know!

I will admit that I used to kill these off as soon as I saw them because I thought they were killing my squash plants.  Then I learned I was wrong during class.  The babies are easy to identify because of their bright colored back-end and when they first emerge, there are bunches of them!

The adults are not so pretty, in fact, to me they look a bit prehistoric.

Instead of reinventing the wheel (no pun intended), I have cut and pasted what someone else has already written about this bug.  The one fact to note – these beneficials do bite humans (actually it’s a pierce and suck) and apparently it’s pretty painful.  If that bite hurts us, think what it does to their enemy!

Once you see a Wheel Bug, you won’t forget it. Not only is the Wheel Bug the largest member of assassin bugs, their bizarre appearance will likely take you back. Adult Wheel Bugs are dark and robust with a grayish-black or brownish-black body. They have membranous wings and long front legs that extend in jerky motions.

Wheel Bugs are camouflaged and very shy, hiding whenever possible. They move and fly slowly. During flight, Wheel Bugs have been compared to an ultra-light plane or large grasshopper as they produce a loud buzzing sound.

The head of the Wheel Bug is very narrow with a stout, rigid, 3-segmented beak and large, multiple eyes serving the bug well as it looks for its prey. Wheel Bugs possess two long, slender jointed antennae that constantly move, waving around slowly, testing the air.

Females lay between 40-200 tiny, brown, bottle-shaped eggs in a cluster on a small shrub or tree twig. Egg masses resemble honeycombs. (At this point, the female dies, for the Wheel Bug has only one generation per year.) These eggs overwinter, cemented together by a gummy substance that may protect them from foul weather, parasites and predators.

Each fertile egg hatches the following spring into 1/8 inch long wingless red and black nymphs with long legs. They disperse onto surrounding trees and shrubs hunting for prey—aphids and caterpillars are particular favorites. Homeowners may see these nymphs on various trees or landscape shrubs. Nymphs undergo five molts and metamorphose into an adult by summer’s end.

Wheel Bugs are voracious predators, preying upon a wide variety of soft-bodied insects, “ambushing them with the accuracy of an assassin.” They are a valuable predator in forests and shade trees because Wheel Bugs dine on the hairy caterpillars that are defoliators.

When a Wheel Bug encounters its prey, it slowly lunges forward using its enlarged front legs to seize and hold its victims. Next, the Wheel Bug plunges its hypodermic-like beak into some soft body part. The Wheel Bug’s saliva contains an enzyme-laden, paralytic substance that immobilizes the prey within 30 seconds, dissolving their insides, and proceeds to drain all of the prey’s bodily fluids. End of pesky prey.

Because of the Wheel Bug’s appearance, it may seem a dangerous insect. Wheel Bugs are not aggressive and will avoid contact at all costs. However, if handled, the Wheel Bug can inflict a painful bite (technically, Wheel Bugs and other types of assassin bugs do not “bite”—pierce is a more accurate term since they have needle-like sucking/piercing mouthparts). Their “bite” has been described as a “sensation lasting several minutes” or “ten times worse than a hornet sting.” The site may take weeks or months to heal.

Regardless, when in the garden or orchard, one should always wear long-sleeved shirts and hats when working. If a bug lands on you, brush it off gently. If you are bitten, cleanse the area with soap and water and some relief may be obtained by using lotions containing menthol, phenol or camphor.

Because most of their prey are considered harmful insects, Wheel Bugs are considered beneficial insects in the garden and wooded areas, as they reduce the numbers of some troublesome insects. Wheel Bugs should be considered one of many valuable allies.

“Beneficials in the Garden”  by Candice Hawkinson

Now that you know this is a good guy, look at this last picture.  This little Wheel Bug nymph is headed for lunch 🙂 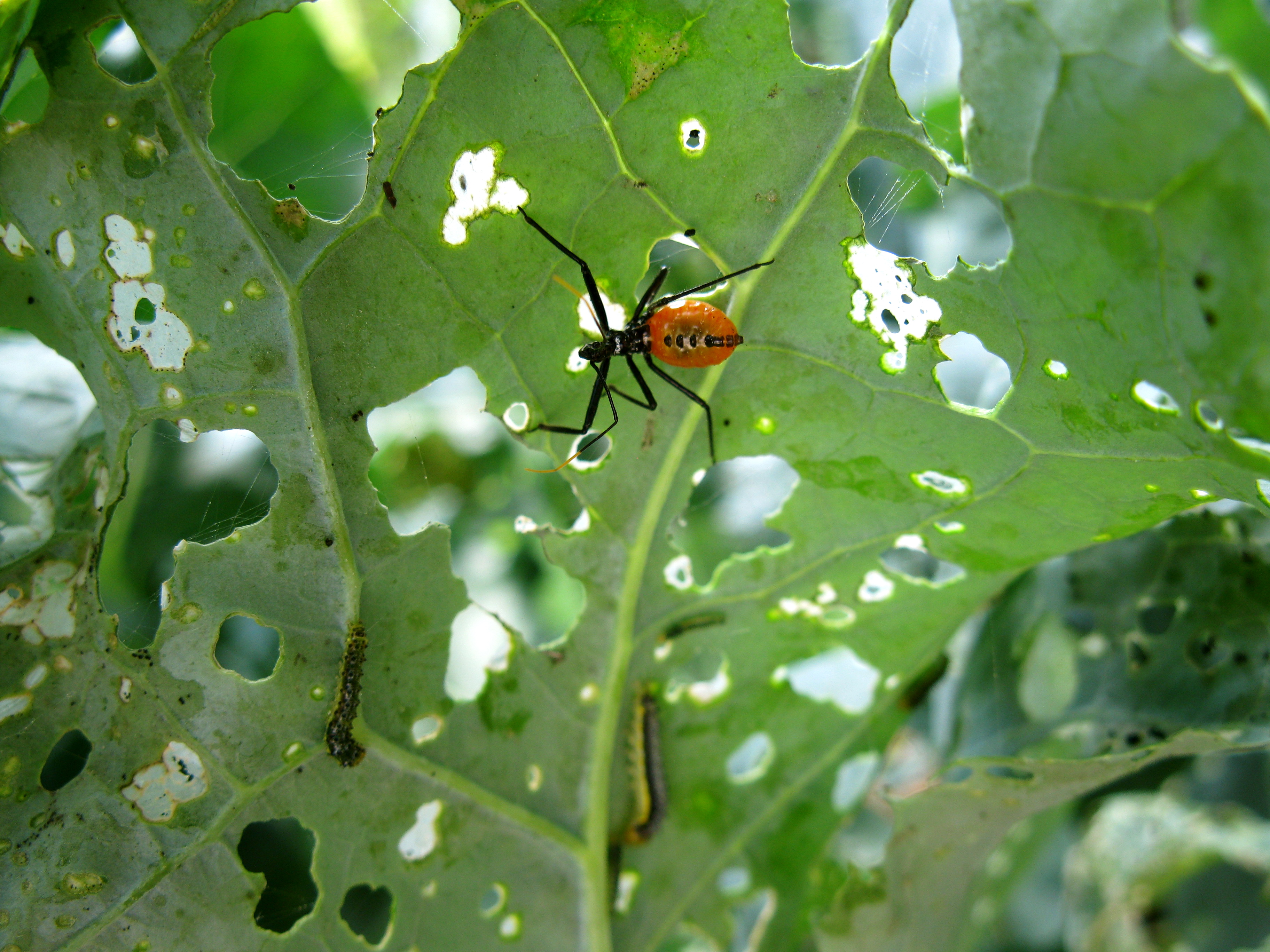